Defiance and acrobatics: Ockham’s Razor bring a jaw-dropping free show to The Lowry 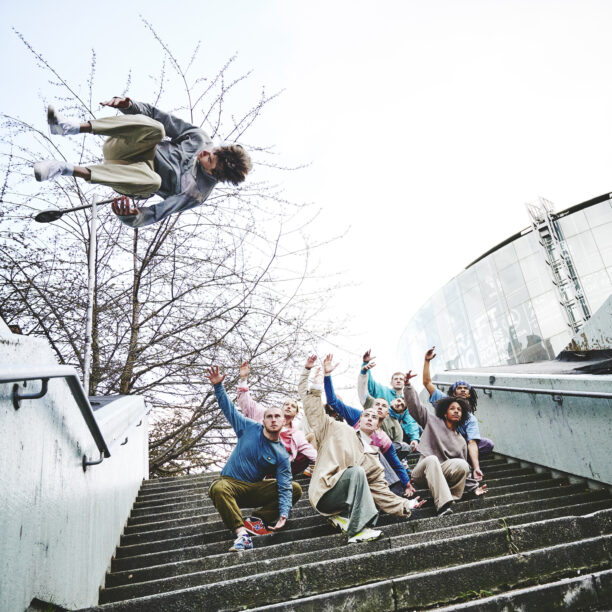 Renowned for their spectacular aerial theatre shows, contemporary circus troupe Ockham’s Razor bring their new show, Public, to the Lowry on the first stop of their summer tour.

Adapting and blending acrobatics, parkour, and breakdancing alongside other styles, the outdoor show will utilise the surrounding architecture in a defiant, emancipatory response to the looming corporate threat to our outdoor freedom.

Public space nationwide, particularly in urban areas, is under growing pressure from seeping private ownership, which creates increasingly hostile environments for the simplest joys of human interaction. For Ockham’s Razor, unbridled public play becomes risky, subversive and deeply necessary as a response to the loss of space for young people, and Public serves as a dazzling, prominent means of resistance.

As an acclaimed circus company, Ockham’s Razor express their ethos with a wondrous shock and awe approach to bodily movement. Modern, younger styles like parkour and breakdancing mesh almost imperceptibly with traditional folk movements and acrobatics. For Public, the group will manufacture an outdoor reality in which they are both spiritually and physically unguarded; at the culmination of each show, including their opening performances in Salford, the dancers will unite with the audience for a last dance of mass resistance in which anyone can participate, with choreography shared on social media in advance.

Charlotte Mooney, Artistic Director of Ockham’s Razor, emphasises the ‘rich tradition’ of dance as protest, from English agrarian workers to digital trends demanding racial justice in the United States. Public draws on these pivotal uses of human movement across history; “it looks at dance as empowerment and asks: who belongs in public space?”

Performances will take place at 12pm and 3pm. Given that the show takes place on the plaza outside The Lowry, no advance booking is necessary and is completely free to attend. For more information, visit The Lowry website.