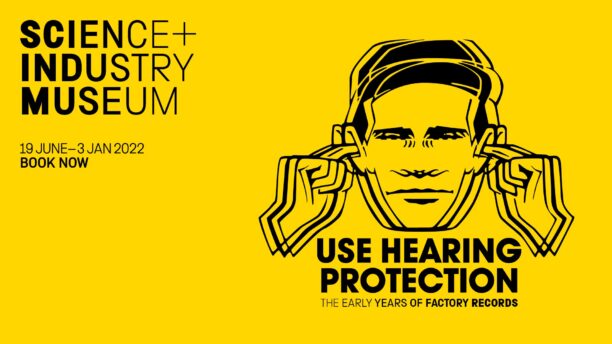 Manchester’s musical and cultural heritage is due to be showcased in a new Science and Industry Museum exhibition celebrating the impactful formative years of Factory Records. Use Hearing Protection will run from Saturday 19 June 2021 until Monday 3 January 2022 and aims to take viewers on a journey through Factory’s early output via 50 numbered artefacts from a number of iconic Manchester acts like Joy Division, New Order, The Durutti Column and graphic designer Peter Saville whose striking work came to define the label, its artists and an entire era of music.

Initially founded by Manchester stalwart Tony Wilson and British actor Alan Erasmus, Factory Records was not only instrumental in promoting the city’s burgeoning musical voices throughout the late seventies and into to eighties but also for helping to redefine the identity of Manchester from an industrial powerhouse to a hub for integral arts, culture and creativity. Curated by the Science and Industry Museum, Joy Division historian Jon Savage and Art Director Mat Bancroft – the exhibition will include a number of rare archive artefacts, donated by Savage, which illustrate the label’s storied history and the role it played in innovating music technology and design.

Among the 50 key items on display, attendees will get the chance to explore Joy Division’s live gear set up, with added illustrations and annotations – as well as a letter from the band’s manager Rob Gretton to Tony Wilson, expressing thanks for the support he provided during the band’s debut television appearance on the What’s On music section of Granada Reports. In addition, visitors will also find a photocopy montage created by graphic designer Linder Sterling that was used as a flyer for an early Factory club night which took place at the Russell Club in Hulme.

By immersing yourself in this iconic musical world, you’ll even get the chance to experience an authentic Russell Club Factory party with the venue’s tribute to these infamous nights – and those who bring their own headphones will be able to remix and create their own versions of iconic tracks using the museum’s synthesizer and mixing desk. A collection of photographs borrowed from the People’s Archives will also be on-hand to illustrate the important role music and culture played in forming thriving local music community.

Tickets for Use Hearing Protection are available now priced at £8 for adults and £6 concession, with those under 12 getting free entry when accompanied by an adult. Book your tickets today by following the booking button below.

A post shared by Science and Industry Museum (@scienceandindustrymuseum)