Lab coats at the ready: How New Scientist Live will inspire the next generation

Making its Manchester debut this weekend, the multi-award-winning New Scientist Live is set to bring an eclectic mix of mind-blowing discoveries to the city.

Taking over Manchester Central, the festival will delve into some of life’s biggest mysteries across three days packed with 40 speakers and more than 30 exhibitors, covering everything from space and cutting-edge technology to what lurks beneath in our oceans.

Along with all the fascinating talks that’ll be taking place, visitors are very much invited to get stuck in themselves, and a key focus for the event will be providing inspiring experiences for the next generation of budding scientists.

Interactive workshops and hands-on activities will be taking place right throughout the weekend. Birmingham City University will be hosting a giant game of Operation, the Wessex Archaeology stand will offer kids the chance to pilot a virtual drone and there’ll be an opportunity to play detective at a mock crime scene courtesy of Staffordshire University.

Salford University’s GameLab will be showcasing the latest VR experiences, Thales will demonstrate some of the latest technology used by the Royal Navy and Science Animated will bring their discoveries to life through jaw-dropping animations. 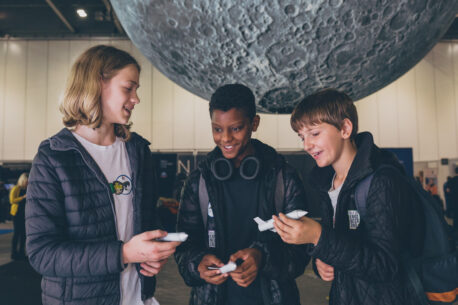 Along with all that, the UK Health Security Agency will be bringing along their ‘Snot Gun’, should you be curious about the mechanics of a sneeze…

Finally, aspiring astronauts will have the unique privilege of being able to smell space—something considered risky for astronauts on the job—and the pop-up planetarium will show an immersive documentary about the Apollo space program.

“We are delighted to get ready to welcome families from all over the region to our festival. We are bringing to Manchester a mind-blowing festival of ideas and discoveries for anyone curious about science and technology and why it matters. It’s amazing to host this event in Manchester which is, of course, internationally recognised as one of the leading global science and technology hubs.

“The event is aimed at anyone who has an enquiring and inquisitive mind. The unique mix of demonstrations, discussions and interactive experiences will amaze and inspire.

“The scientific and technological heritage of Manchester means it’s the perfect location for the world’s greatest science festival.”

You can grab your tickets for the festival using the button below.