Manchester is set to gain its first city centre park in a century, with new images offering a glimpse at the stunning new adventure space at Mayfield.

Perhaps the most notable addition is that of a see-through 18-metre-long slide, which crosses the waters of the newly-restored River Medlock. In total, there will be eight slides, including a 60-degree drop slide, racing slides and a six-metre spiral slide. 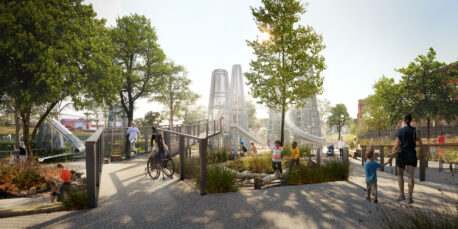 At more than 1,400 sq ft the public playground becomes the largest in the city, with a series of nods to Manchester’s industrial heritage. The chimney-shaped towers are inspired by the recently-discovered remains of an octagonal factory chimney and one of the play tunnels is inspired by Mayfield train station, clad in reclaimed brick to mimic a railway tunnel.

The playground will also encourage engagement with wildlife and nature, boasting trim trails, stepping posts and balance beams all running throughout greenery.

Set for completion in Autumn, the space has been created to be as inclusive as possible to all ages and abilities. It has been designed collaboratively by regeneration specialist U+I on behalf of the Mayfield Partnership, landscape architects Studio Egret West (SEW) and Massey & Harris, an independent play equipment specialist based in Greater Manchester.