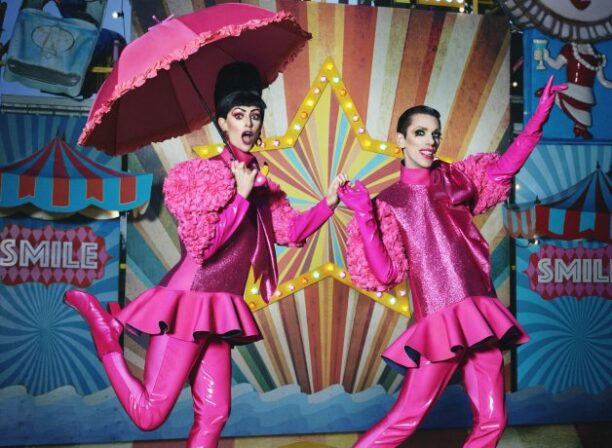 Promising to ‘put the FUN back into our fundamentally pointless existence’, cult cabaret legends Bourgeois & Maurice return to the HOME stage on Friday 16 December with Pleasure Seekers, a gaudy barrage of optimistic abandon featuring show-stopping outfits, inspired musical numbers described in North West End’s five-star review as ‘a machine gun of quips,’ and an 8-foot pinata.

Praised by Londonist as ‘a riotous technicolor jolly’, Pleasure Seekers features Bourgeois & Maurice at their baroque best, wielding a unique brand of pop-satire to gleefully decimate the grim pillars of modern existential malaise in honour of meaningless hedonism and all its sleazy delights.

Now firmly established as one of the UK’s most subversive, original music acts, the ‘neo-cabaret’ duo perform for two nights in Manchester as part of HOME’s 2022/23 Theatre Season.

Standard tickets to Pleasure Seekers are £20, with 15% off if you book before 31 July. For more information, click here.