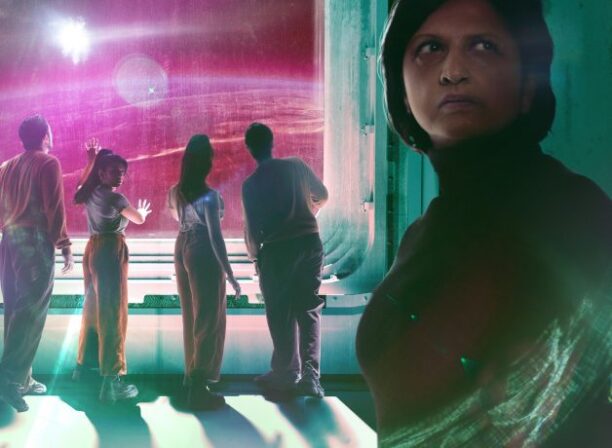 Opening on Wednesday 2nd November, Vinay Patel’s sci-fi adaptation of the bittersweet Chekhov play The Cherry Orchard runs for thirteen days at HOME as part of its 2022/23 Theatre Season. Directed by James Macdonald, Patel’s ambitious, soaring play features an all-Asian cast and a concept – interstellar Russian melancholy – which sells itself.

Patel’s interpretation of The Cherry Orchard follows the crew of an ageing starship, led by Captain Ramesh, as they travel at near-lightspeed in search of a new, habitable home having each spent their entire lives on board, like the several generations before them. However, upon finally discovering a livable planet, Ramesh becomes adamant that they cannot leave the vessel, and resentment festers among the crew.

Having already established himself as an outstanding screenwriter, picking up both a BAFTA Brit Breakthrough Award and a Royal Television Society Award for Murdered By My Father, and two Hugo nominations for each of his Doctor Who episodes, Vinay Patel’s The Cherry Orchard marks the best entry so far in his meteoric career as a playwright. After a successful theatre debut with True Brits at the 2014 Edinburgh Fringe, Patel scored three Off West End Awards nominations for his follow-up, Free Fall, aged just 28.

Tickets for The Cherry Orchard are on sale now. For info on group bookings and dates with accessibility features, click here.