Work to begin on Manchester’s urban sky park in Castlefield

A new urban sky park that will transform a Manchester viaduct has moved a step closer, with work set to get underway.

Expected to open in July, the National Trust will transform a 330-metre steel viaduct that was built back in 1892, into a temporary park above Castlefield.

The structure, which was originally built to carry heavy rail traffic in and out of the Great Northern Warehouse, will be revolutionised into a flourishing green space that will serve as a meeting place for both people and nature.

Hilary McGrady, Director-General of the National Trust says: “This is a hugely significant moment in our plans for creating a unique green space to benefit the surrounding community and to bring more nature to people’s doorsteps. The project is also a fantastic way to celebrate our industrial heritage, bringing it to life for the 21st Century.

“The pandemic showed us the importance of our local parks and gardens, but it also highlighted significant inequalities in access to green space in urban areas like Manchester.

“By working with others, we aim to increase access to parks and green spaces in, around, and near urban areas, so eventually everyone is in easy reach of quiet places for reflection with wide open skies.

“We hope that ‘greening’ the viaduct will become a stepping-stone to other Manchester green spaces and nearby attractions, adding to the city’s vibrant, cultural offer.” 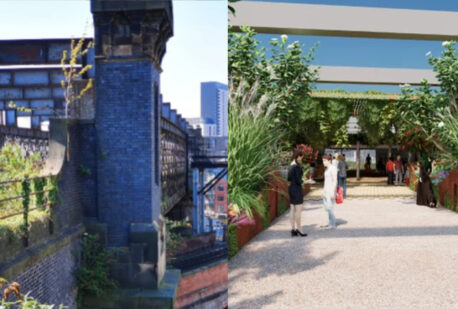 The Science and Industry Museum, Urban Wilderness, City of Trees and Castlefield Forum have also been involved with the plans.

Urban Wilderness will be working with Manchester-based charity, 42nd Street, supporting young people who have suffered mental health challenges to create something special in the space.

The Science and Industry Museum are planning a garden with heritage plants, trees and flowers; interpretation of the industrial heritage that can be seen from the viaduct; and themed special talks and events for all ages across the summer and autumn.

The theme of the City of Trees partner plot is ‘Trees – Past, Present and Future’.  It aims to showcase a variety of trees, shrubs and flowers that have been used throughout the Industrial Revolution, as well as displaying trees significant in Manchester today, and those that will play a role in the city’s response to climate change in the future.